All you wanted to know about Efren - but hesitate to ask

Pro: When you first started out did you imagine you would be in the position you are today as one of most highly, if not the most highly, regarded pool player of all time?

No. When I started I just wanted to make money like the other players that I saw hustling in the pool halls. Back then, Pool players were not celebrities because it was not on TV. 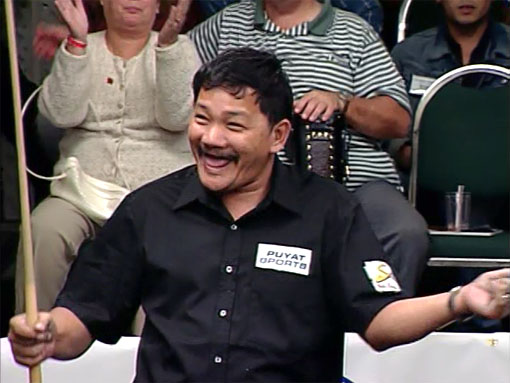 Pro: How does it feel to win just about everything there is to win?

Of course I like winning. But I think the secret is never thinking that you have done enough. I still want to win now just like the first time.

Pro: What's his favorite win in his career?

Of course the world 9-ball Championship.

Pro: Why do you always win big tournament with big paycheck?

Because I’m more experienced than the other players. The pressure does not affect me as much as them when there is a big title or big money involved.

Pro: Are you having as much fun as you seem to be having?

Pro: Who is/was the best Filipino you ever saw/played? Which player would you call your successor?

None. I have no patience for it.

Pro: Who was your idol in billiard when you were young?

Pool was not televised yet so there were no real pool heroes or popular players when I was young.

Pro: Who Efren says his teacher/mentor was?

Pro: What top players influenced you when you first started?

Like I said there were no top players in those days. Maybe they were playing in America,but where I’m from I was not aware of them. I only knew who they were whe I was already playing professionally so you can’t say they were an influence.

Pro: Who was the legendary Boy Bicol? How much spot did he give him back in the day when he was a teenager?

Manuel Flores. He’s like Luat and Keith McCready. They have the same attitude. They’re very funny. We play even. But the last time we played it was 50-70 rotation. 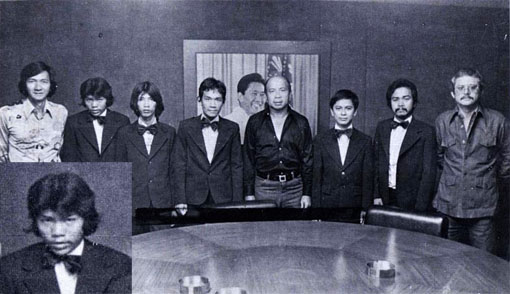 Pro: How often did you practice before you became a pro caliber player?

I was in the pool hall everyday and played all day for years and years. Until now I practice.

Pro: When was the last time you intentionally practiced?

For the Philippine team we practice about three times a week. I also practice seriously before the doubles tournaments like with Rubilen because it is very different from playing alone and you need to know your partner’s style.

Pro: How many hours on a given week average does he play, practice, or is on a pool table ... as you get older do you play less or more to keep your skills up?

I still play everyday if possible. I always have money games scheduled or I practice with the Philippine team.

Pro: What do you think the best way to practice and improve would be?

Play alone so you can analyze every aspect and play money games.

Memory. It’s better not to forget past experiences and learn from them.

Pro: Which element of your game is weakest? Which strongest?

My break is the weakest especially for 9,8 and 10-ball. My strong game is one pocket and it used to be rotation but now there are many good players that are younger and with strong pocketing.

Pro: Did you start playing One Pocket only in US? How did you get knowledge on this game? Who did you watch?

I only started playing it in the US since 1986. I only watched other players and learned from Freddie «The Beard». 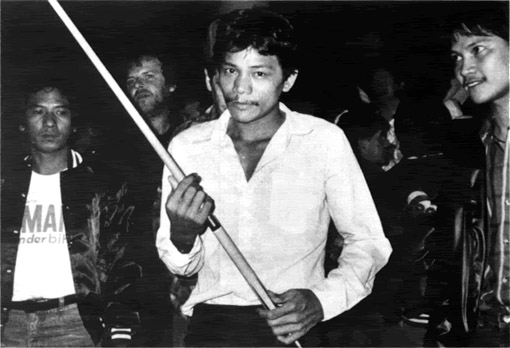 Pro: I'd like to know who he thinks his toughest opponent has been in his career?

Now there’s a lot because there are so many good players now all over the world. Before I would say Strickland, Johnny Archer, Mike Sigel.

Pro: Who do you feel was the best American player he ever faced or which American gave you the most difficult matches?

The three guys above.

Pro: Going into the last day of The Color of Money match in Hong Kong against Strickland, he was down around 20 games (if memory serves me). Why was he so confident he was still going to win? Did he feel much better than he did the previous days or did he see something in Earl that led him to believe that Earl was going to self-destruct, or does he have that same confidence regardless of how many game he may be down?

At the start my break was not working. Once you get the break there is always hope since it was winner’s break.

Pro: When you are playing pool for a long time, how do you combat fatigue that has already set in?

There is no fatigue as long as I can see the prize money at the finish line.

Pro: Have you ever used anything (books, ideas,etc.) to help you in the mental aspects of playing pool and competing?

Not really. Like I said, when I started, there was no scientific method to pool. I didn’t think about these mental tactics before.

Pro: How do you handle pressure?

The pressure disappears when you concentrate. I’m more scared when I go up the stage to speak rather than when I go out to play.

Of course the game with Earl Strickland. But that’s almost like an exhibition. I don’t know. We always gamble. I don’t know when the session starts or ends.

After so many games it’s difficult to remember this. The only spots I got was maybe 30 years ago. After that it was impossible and everyone want the biggest spots from me all the time.

Pro: They say there is some dude (drunkard) in Manila which sometime beat Efren? They say he only played to buy a booze. Is it true?

Who? There are many guys who have beaten me but most of the time I give handicap of course. No one plays me even now except foreigners.

Pro: Last time I went to Manila and I saw player after player get up to play him cheap sets. How much money have you made over the years from playing people that are just happy to say they played THE Efren Reyes?

I make some money when there are tournaments in Manila because the foreign players are here. It’s not as much as you think. I always give some to the spotter in the pool hall, then to some of the young players sitting around. My driver, in the end I get about 30% of the total amount. 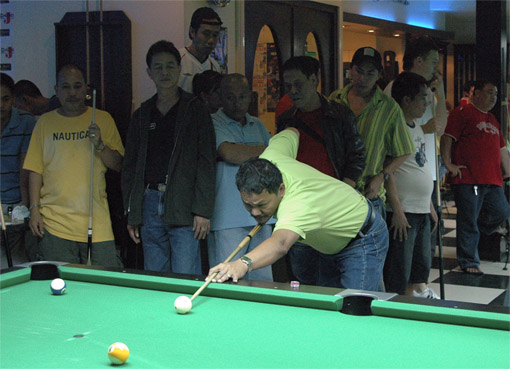 Pro: What time do you usually get to sleep and wake up?

That depends. Sometimes we play until very late at night. But I can always wake up early. I am used to it because I have to travel to Manila all the time.

Pro: Do they offer you to write a book?

Yes I have many offers but both my sponsor and think it’s not yet time.

Pro: Manny Pacquiao has his own TV show in the Phillipines, where's the Efren Reyes show? There should be one!

Pro: When will you release instructional DVD (many think that it’ll be very popular). Or you waiting the moment when you quit pool and your secrets not turn against you.

When I’m retired it’s a possibility.

Pro: Do you have a time set in your mind when you will quit competing at pool, or will you just play as long as you feel competitive?

As long as I am still winning I will play. I tried to join the senior tour but they kicked me out. They don’t want me to play there because I will take all their money haha!

Pro: Stroke routine: You consistently take six practice strokes. The first 3 appear to be for fluidity (cue action not straight), whereas the last three appear straight as an arrow. What feeling/sensation are you looking for in each set of strokes? How did you develope this routine (i.e. watching others or self-discovery)? Additionally, during each practice stroke of the six, what are your eyes focused on, and are some of the practice strokes focused on tuning certain hand or arm muscles? does any of it have to do with adjusting grip? please get Efren to answer this one in DETAIL.

To be honest I did not even know I do six strokes. If you have been playing as long as I have, sometimes it is more about what feels right than actually thinking about it. The arm movement is muscle memory. What I think about is the angle, the English but the aiming and the stroke is almost automatic. When I started there was no scientific method. So we just did what felt right. The grip depends on the amount of speed I want to use and that is something that comes with instinct now. 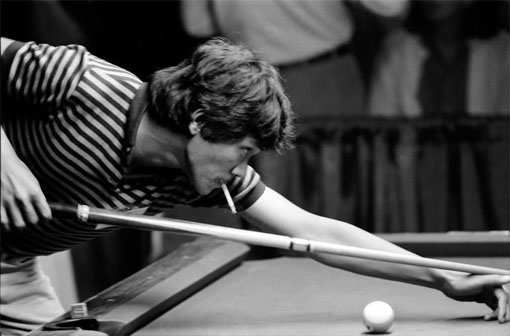 Pro: I know Efren plays some sporty 3 cushion and reportedly has also played some good snooker. I'd like to hear his opinion on the differences between the games.

The concept is the same. You just need to make some minor adjustments. In 3 cushion, knowledge of angles is the main focus. In snooker, pocketing is very important. Cheating pockets is not an option that’s why many snooker players are great pool players as well. In pool, you need to combine all these factors but I can’t say one is more difficult than the other.

Pro: When you play snooker do you change stance if compare with your pool stance?

Yes. I have to imitate the snooker players. I just learned from watching them.

Pro: Have you heard about russian billiard (pyramid). Your friend Bustamante competed on World Pyramid Championship 2000. Did he mention that?

I’m not familiar with it.

Pro: If you had to pick only one game to play what game would it be & why?

One Pocket — there is no luck and you really have to know the game. Now the young players can beat me in pocketing but they can’t outsmart me yet.

I hate the Jump cue.

Pro: You played with Meucci, Judd, Pampanga cue, Mezz, what is your favorite? What cue do you use now?

Pampanga Cue is definitely the best!

Pro: Did well-known manufactures offer you to make a contract?

Many manufacturers offered. I already had endorsements with Meucci and Mezz.

Pro: Have you ever tried Predator 314-shaft, what can you say?

Now I use it. It’s ok. It still has to prove itself. But now with the magic rack, it’s not such a BIG advantage to use the predator shaft.

Pro: Any interests or hobbies outside of pool? 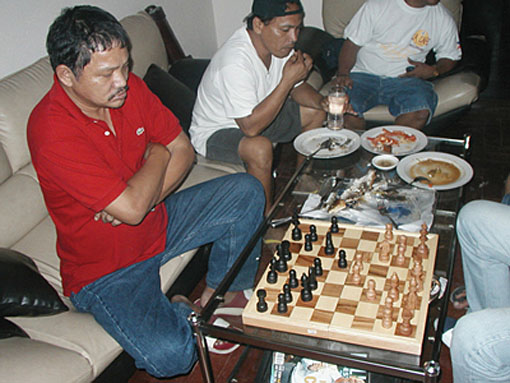 Pro: How your health is holding up as you gets older?

Not so good I feel my age now. My body does not always do what I imagine in my mind.

Pro: How did laser surgery help to you. How many were operations?

It helped me a lot. I only had to do it once but of course I constantly have it checked to be sure that there are no problems.

Pro: What makes you happy?

When I win the tournaments. And playing card games and playing with my grandchildren.

Pro: What's he most proud of in his personal life?

Pro: Who are your parents?

Pedro Reyes, he was a barber and my mother was Romana Manalang a market vendor.

Pro: If he has any children/nieces/nephews coming into the game?

None. They only want to spend the prizemoney haha.